At home on the water

The Isle of Barra – Outer Hebrides

It has been a whirlwind of a month which has most recently landed me back in Victoria BC, Canada (my home waters), but I feel I am only just arriving here and in order to truly arrive, I feel I need to reflect on my magical times in Scotland.

I didn’t know it was a dream of mine to paddle in Scotland, until I paddled in the Small Isles last year. Once I had floated around in the tidal streams; explored the bleak, yet beautiful rocky and heather coloured islands and had the opportunity to bask in the depth of cultural myth that fills this place, I knew I needed to return.

Scottish Castle and me in Castle Bay

The hillsides spring to life with wildflowers

This year I was lucky enough to get an amazing weather window that forecast calm winds and cool seas. It was just the push I needed to hop on a ferry from Oban to the Outer Hebrides and launch my little kayak from Castle Bay on the Isle of Barra heading for the cliffed islands stretching south into the horizon.

I arrived and immediately floated my boat, setting out for an evening paddle. I wove my way through the Isles as the sun dipped itself into the ocean and the puffins heralded dusk, returning home after a long day fishing. I arrived at the Isle of Mingulay at 10pm and fell asleep under a pastel sky.

An early start took me around the Isle of Berneray with breathtaking sea cliffs covered in curious Razor Bills, screeching Kittiwakes, bobbing Puffins and 2 golden eagles soaring high above the lighthouse. The calm waters around Barra Head afforded me a closeness and stillness to be a silent witness below the skies completely alive with birds on the wing. 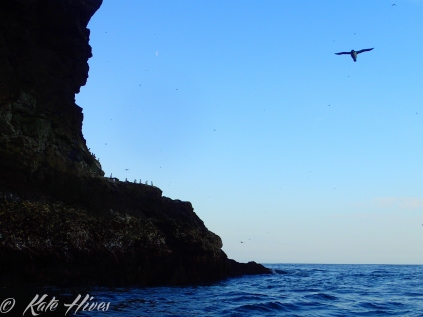 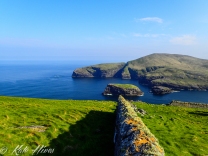 The view from Berneray lighthouse towards west Mingulay 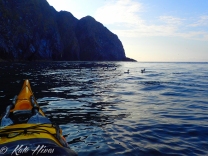 The west coast of Mingulay was exciting. It is a cliffed and rugged coast with caves, arches and fissures perfect for paddling through and around. Being alone, I had a word with myself about what kinds of passages I may paddle and decided that anything I would want a helmet for was completely out of the question. But when I got to a natural arch inside a cave that heralded light on the other side… I had to do it! I took a deep breath, held it, accelerated and blasted through the opening into another cave and out into the daylight. I guess it wasn’t really all that dangerous, but I felt exposed for a moment. Once on the other side the sense of excitement and surprise was overwhelming and it spilled out of my mouth as a hoot that echoed through the cave walls. 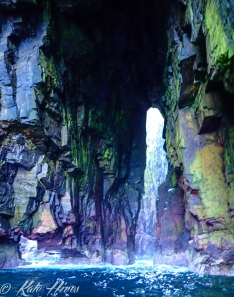 The one where I held my breath

I wove my way back north being sure to explore each isle in its entirety. The wind stayed down, the seas were forgiving and I moved through the seascape with wonder and ease. When I arrived back at Castle Bay, it was a Sunday and I could hear music coming from the local pub. I’ve never been one to pass up a good old local jam, so I headed for the sunny patio and ended up with a beer and a whisky in front of me as we sang old songs accompanied by accordion! The local scotsmen of Barra are alright with me!

I had one more day to paddle and decided it would be a wasted day if I didn’t set a goal, so I decided I would paddle around Barra. It was only 26 Nm but with half of the paddle likely to be into a stiff headwind, I wrestled a bit with my lazy self. I set out on the west side of the Isle and into a 15kn wind, finding myself more and more comfortable to paddle alone, in bigger sea conditions… It did take a bit of getting use to at first but paddling alone is feeling liberating. 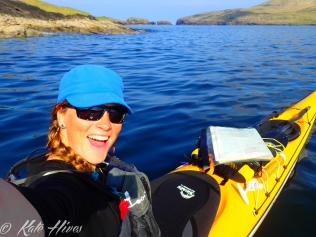 The turquoise waters and dunes of North Barra

The hard work paid off and once I reached the northern most reaches of Barra and it’s turquoise seas I turned to head south with an even stiffer tailwind. The push was a lovely change and as I paddled south, I sang and laughed as I danced with the wind and water. As the utilitarian Scottish castle came into view on my arrival back into Castle Bay, 2 white tailed eagles took flight from the nearby shore to soar above me and carry on southwards circling higher and higher. I settled into my tent that night, preparing for an early morning onto the ferry back to Oban, feeling as though I had tasted a little bit of magic that this place has to offer. I have not yet satisfied my desire to paddle in this place and the Isles to the north of the Outer Hebrides is now calling! 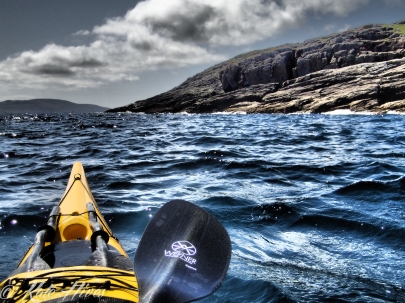 Gifts from the Golden Eagles 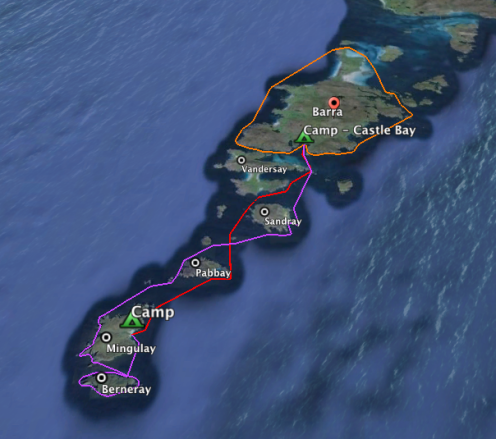 ← Fear to Focus: Solo Paddling Psychology
10 things I learned on my kayak trip – Notes from a student →

Happy Yuletide to you all! Atlas has been the greatest gift of 2020 and a true anchor for joy in our worlds. It is so easy to lose sight of what is important, but this little guy has highlighted what truly matters amid all the politics, fear and worry...community and togetherness. May you find time and space to connect in meaningful ways with your people and if you aren’t sure who your people are... may they find you! Merry Christmas all!
Thanks @jaimesharp_adventures for the encouragement to get this Mama back in her boat!! I am so lucky to have a supportive husband in @josjourneytheroamingnomad so I can get on the water and ride some waves for the first time in a year!!! It seems as though it’s just like riding a bicycle-except I’m on the water and in a kayak!!!
Today I got to spend the day with Jo and Atlas for their first Father’s Day together! We went down to the beach for fish and chips and had daddy dip Atlas’ feet in the ocean for the first time!!! This was his “paganing” - like christening but slightly different. The water was cold, but he’s like his dad...brave in the face of cold water! I love these two boys and feel so lucky to watch this man become the most amazing father!!! #soinlove
We are so excited and proud to introduce Atlas Saundowal Hives who arrived on May 27th, 2020. In true Kate and Jo style the birth was an epic 50 hours long, filled with excitement and at the end Atlas rocketed out into 3 pairs of waiting hands.
36 weeks!!! New little human is coming soon!!!
Standing in solidarity with the #wet’suwet’en at BC Legislature today. Come if you can, peaceful protest, community solidarity... take care of each other!
Loading Comments...
%d bloggers like this: